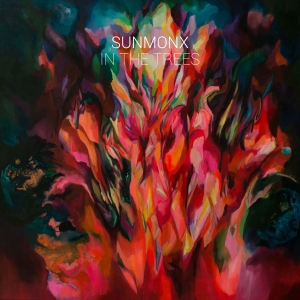 “Neo Funk and Soul Duo Find Balance in the Melody”.

Following the success of their debut album Power Salad, international glitch-hop extrordinaire Opiuo and downbeat guitar maestro Austero have teamed up again as Sunmonx to let another one fly with a short, sweet EP titled In The Trees.

After headlining slots and running entire shows in the USA, Canada, Australia and New Zealand the two obviously decided to use their downtime wisely. The result is a catchy 20 mins of funky, glitched out electronica from Oscar, blended with a soulful guitar-sound from Albino. The tasteful balance of the hard-edged funky glitched-out electronica and sweet, well-arranged guitar riffs are no more prevalent than in the Rotney Stem Cell. The track almost smacks of a chance integration between the two that has since paved the way for a deeper musical connection. Wether the two are trading riffs one-on-one, or harmonising together with melodic interaction, it’s the last track that shows us a window into the world of what may be on the way. Run is just under two minutes of magic. With an introduction from Austero, Opiuo’s electronic element tempers nicely to bring the two into a unison greater than the sum of its parts. In the trees hits the dub-reggae vibe both are at home with.

The Sunmonx team are both successful producers in their own right. Austero’s remix of Sufi Dub for Monkey Mark was the most downloaded track from Addictech.com in 2014, and Opiuo took best electronica album at the New Zealand Music Awards for Meraki the same year.

With some stunning cover art by Jewels Stephens, the record is available through Interchill.

Music Reviews by Will Hancock. www.twitter.com/willchilled www.kymatix.tumblr www.mixcloud.com/willhancock www.beattopia.bandcamp.com www.linkedin.com/pub/william-simon-hancock/1b/800/13b © William Hancock and Custom Shop Records, 2014-2020. Unauthorized use and/or duplication of this material without express and written permission from this blog’s author and/or owner is strictly prohibited. Excerpts and links may be used, provided that full and clear credit is given to William Hancock and Custom Shop Records with appropriate and specific direction to the original content and notification of the said author in written documents.

One thought on “Sunmonx – In The Trees”